I have quite many Gmail invitations and would like to give them away to some nice people :).
It is completely free, but you need to agree with these statements in order to get the invitation:

2. You respect people with different ethnicity, religious and cultural backgrounds.

3.You think the debate on foreigners in Denmark is going too far and in fact is disgusting and perverted.

4. You will try to get out of state of ignorance (if you’re in such).

5. You wish US, British, Danish and other troops stop occupying Iraq and withdraw as soon as possible.

6. If you don’t know anything about people of different culture and religion, you are not automatically afraid of them, and you don’t think they are all criminals who want to hurt you. You will, at least, try to get to know them first before making any conclusions.

7. You believe that a war NOT authorized by United Nations is a filthy and illegal war. Persons and countries that stand behind these actions should be persecuted by the International War Tribune.

8. You are against any form of terrorism, but you are trying to find out and understand its cause.

9. You do not reject Michael Moore’s facts published in Fahrenheit 9/11 just because you don’t like him or because you sympathize with those he criticizes. You care about truth and facts.

10. You want a fair solution to the Middle East conflict, which contains discontinuance of Israel’s occupation of Palestine, stoppage of terrorist attacks from both Israeli and Palestinian sides, and you want an emergence of sovereign Palestine state with the borders defined according to UN resolution 181 from 1947 (?).
——
Firstly, If you can say YES to all the questions, I can congratulate you for not being a stupid and ignorant pig, but genuine and righteous human being who respect others and seek bilateral and equal communication with other human beings. You embrace knowledge and truth, and despise ignorance, “blindness” and stupidity.
Secondly, Gmail invitation is on the way to you (if there are still some left).
All you have to do is to comment this post and write your existing mail, so that I can send you an invitation.

I read today that the popular PC game “The Sims” will soon appear as Reality TV.
Well, I already know that the evergrowing number of stupid and low-critique TV-viewers can watch idiotic soap operas, moronic reality shows like Survival and all those “love” shows, but that we soon will be able to see such a program but with artifical “life” – that I could not predict. Stupid me. Well, knowing the TV behaviour and interests of today’s viewers I am almost sure this freak-show will be a success. Just wait and SEE!

Man, it wasn’t funny when we lost electricity in our home last night. It was so dark, that it took me almost a minute to find a light, although I placed it on the table.
Man, this reminded me a little bit (just a little bit) of the horrors under the Serbian agression on Bosnia, because it all started with the power shortage.

There’s a very powerful hurricane going on here in the country as in whole Scandinavia.
4 people have died until now in Denmark, I don’t know how is it in Sweden, Norway and Great Britain.
My city (80,000 inh.) was cut off the electricity, good news is it was only for the short time. There are still about 25,000 homes without electricity.
Many Danish coastal towns and cities are under water.
The authorities are advicing people not to leave their homes.

(The whole situation is quite paradoxal since here in Denmark today was a nationwide fundraising for the victims of South-East Asia. There was gathered around 200 mio. DKK (35 mio USD)

Here are some pictures: 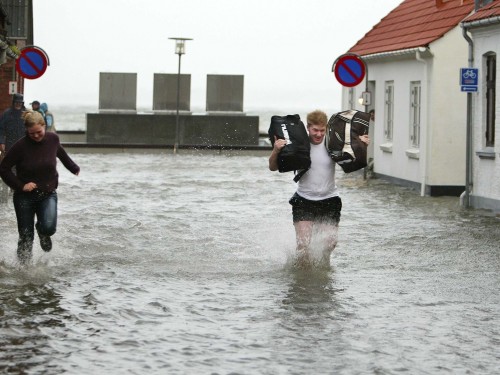 The year of 2004 is over and it is time to reflect over the year; the most rememberable and most forgettable moments, favorite movies, albums, games, how was it in general.
Well, I can say that 2004 was a big mixture of good and bad experiences and moments (surprised?).

So here it goes, first the bad things in 2004:
February 1 – A hajj stampede in Mina, Saudi Arabia, kills 251 pilgrims.
March 11 – Simultaneous explosions on rush hour trains in Madrid kill 190 people.
March 17 – Organized violence breaks out over two days in Kosovo. Nineteen people are killed, 139 Serbian homes are burned, schools and businesses are vandalized, and over 30 orthodox monasteries and churches are burned and destroyed.
April 25 – Referendums on a United Nations plan, which proposes to re-unite the island of Cyprus, take place in both the Greek and Turkish parts. Although the Turks vote in favor, the Greeks reject the proposal.
April 28 – Abuse of prisoners at the Abu Ghraib prison in Iraq is revealed on the television.
September 1 – Chechen rebels take between 1,000 and 1,500 people hostage, mostly children, in a school in Beslan, Northern Ossetia. The hostage-takers demand the release of Chechen rebels imprisoned in neighboring Ingushetia and the independence of Chechnya from Russia.
November 2 – U.S. presidential election: Incumbent president George W. Bush defeats Senator John Kerry.
November 7 – U.S. forces launch a major assault on the Iraqi town of Fallujah.
November 28 – Explosion in coal mine in China. Death toll expected to be above 150.
December 26 – The strongest earthquake in 40 years originates from the Indian Ocean off the west coast of Sumatra island in Indonesia, measuring 9.0 on the Richter Scale and creating tsunami tidal waves that sweep across much of the coastlines of Sri Lanka, India, Bangladesh, the Maldives, Burma, Thailand, Malaysia and Indonesia. At least 150,000 people from South Asia to as far as Somalia in Africa are reported to be dead.
December 28 – Susan Sontag, writer and activist dies.

Now the good moments:
February 3 – The CIA admits that there was no imminent threat from weapons of mass destruction before the 2003 invasion of Iraq.
March 29 – The Republic of Ireland bans smoking in restaurants, pubs and bars.
April 21 – Mordechai Vanunu, who revealed an Israeli nuclear weapons program in the 1980s, is released from prison in Israel after an 18 year term for treason.
May 1 – the largest expansion to date of the European Union takes place, extending the Union by 10 member-states: Poland, Lithuania, Latvia, Estonia, the Czech Republic, Slovakia, Slovenia, Hungary, Malta and Cyprus.
December 26 – The re-run of the second round of the Ukrainian presidential election takes place. Opposition candidate Viktor Yushchenko is declared the victor.

My favorite album of 2004 is probably Pain of Salvation’s Be. Very close to this one is Adagio’s Underworld. Both great albums of progressive metal.

Favorite movie is “House of Sand & Fog”, because of the fantastic manuscript and wonderful actors as Ben Kingsley and Jennifer Connely.
I also must mention “Lost in Translation”.

My favorite online radio is “Khaha.com” for making me laugh all those nights I spent in front of my PC.

The favorite game is Mafia. Although I am playing this game since 2002, it still amazes me. But if I should name the game that got out in 2004 than it is probably Rome: Total War.

So, the year 2004 was very rich in moments of every kind, but THE MOMENT OF THE YEAR is definitely October 6 when I got a beautiful daughter Hana. She is simply a new light of my life.

————
* facts are taken from wikipedia.org